If you read my article on Rogaine, then you already know why I ended up here. For everyone else, the short story is that after elongated use of Rogaine (both solution and foam) I experienced some side effects that may be considered “unusual” as well as some of the common ones so I decided to give something else a shot. After all, what did I have to lose? More hair? Ha, like I had a choice!

About 6 months into my Rogaine regiment, I started experiencing what felt like tachycardia (rapid heartbeat) but it was intermittent. Being the macho men that I am, I wrote it off as just some anomaly or me being a hypochondriac because I had read the potential side effects of minoxidil. As if that was cause enough to stop Rogaine or try something new, my scalp became vastly irritated with the consistent use of rogaine. Of course that too was a side effect written on the bottle, but I had been experiencing this “sensation” far before the use of minoxidil so I knew this was not me being a hypo-idiot. After about a month of just dealing with the excessive irritation inflamed by the rogaine, I decided to put in some effort to diagnosing myself. I immediately assumed it was one of the 4,000 types of alcohol found in any of the minoxidil treatments I had already tried or was trying.

Alcohol is known to dry the skin and cause inflammation in already irritated areas. With that in mind, I decided to try something new. I tried to find a minoxidil product who’s formula was not entirely based on an alcohol solution. I had a genius plan, and that plan was to ask my genius friend Google for support. He’s a real pal, smartest guy I know. Anyway, in so many words I asked Google for a “water soluble minoxidil” solution. I knew it was a long shot but obviously the hail mary was caught or I wouldn’t be writing this right? BOOM! I landed on this page for a product called Spectral DNC. Right there in the description were almost the exact words I had searched for, they had a water soluble minoxidil solution. The question was, is this actually going to be THE SOLUTION? I tried it, and now Im writing my Spectral DNC review. 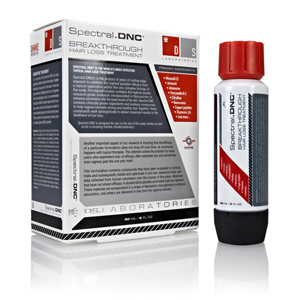 Upon landing on the Spectral DNC page linked above, I ordered a bottle right away. I had already been on minoxidil for 6-8 months at this point, so it wasn’t as if I was going to have to start all over and wait for my results. I figured I would just be picking up where I left off at worst, which was really where I started :/ After reading a bit more, it seemed that the main marketing point of DS Labs’ Spectral DNC was that they used a compound of minoxidil called Minoxidil Sulphate. At first, I figured the reason for this was because minoxidil became water soluble in a sulphate form but after some further reasearch I found some even further research that had been on done on the compound Spectral DNC was glorying. It seems that a study was done on minoxidil and its subjects and the following excerpt was issued

Although it is FDA-approved and has proven science behind it, the catch is that minoxidil doesn’t work for everyone. In fact, over-the-counter minoxidil may only work well in about 38.3 per cent of patients, according to medical studies. Studies suggest that a patient has to have an active enzyme called “sulfotransferase” in order for their hair follicles to respond to minoxidil treatments. It is this enzyme that converts topically applied minoxidil into the active chemical (called minoxidil sulfate) that stimulates the follicles.

Not everyone has enough sulfotransferase to “activate” minoxidil. There may be other biological roadblocks too — like inflammation at or around hair follicles in the scalp and other factors, which can also affect minoxidil’s action. The bottom line for patients is that there’s a 65 per cent chance that standard over-the-counter minoxidil won’t help you. Instead, you may require a prescription for a specially formulated, compounded minoxidil solution for optimal results. A new “minoxidil sensitivity’ test will be out soon in the US, which can pre-determine if a patient is likely to respond to standard over-the-counter minoxidil before they start the treatment.”

From that I gathered that I might be short on some enzyme called sulfotransferase and this stuff might actually be my miracle solution. It may be the answer to why I had seen little results using rogaine and also allow me to evade the massive irritation that followed alcohol soluble formulas. About a week later my bottle of Spectral DNC arrived, and I was ready to do my own study and Spectral DNC review. I used it for about a week, spraying 10 times into my hair and spreading it around just right twice a day. At first I felt no difference, good or bad, but then my symptoms or scalp irritation began to deflate a bit. I had high hopes for this product but it made my hair feel insanely oily and made it tough to work with.

Obviously, oily hair looks thinner so that didn’t help my confidence much but I figured it was worth it to keep going with a product that wasn’t going to irritate the hell out of me night and day. The month went by in a day, so to speak, and while my irritation to did go down SLIGHTLY with the use of this product, I cannot say I would recommend it over the Rogaine foam. The price point wasn’t going to help out DS Labs in this Spectral DNC review so you can throw that argument out the window. I am not going to say this product didn’t work because I didn’t give it the full effort and dedication but I will say with confidence, that it was not worth the price.